Tonight, Leamington Underground Cinema continued its 2013 festival at the Arts Trail Studios for all things animated. The evening drew a large crowd once again, eager to watch Don Hertzfeldt’s It’s Such a Beautiful Day, a feature length incarnation of his trademark stick-man style of story telling. Hilarious and sad in equal measure, there’s nothing else quite like it. If you get a chance to watch It’s Such a Beautiful Day, then do – but in the meantime, you can get a good idea of what Hertzfeldt is all about with his short film, Ah, L’Amour. As ever, LUC laid on a fine selection of shorts to get things going before the main attraction, and in keeping with the theme of the feature, this consisted of an hour of different animated films. I’m a huge fan of animation, which is why it’s even harder than usual for me to resist the temptation to mention every short that was screened – but I must be selective. As such, I share my thoughts on a few of these films, below, for your consideration.

Some films achieve a lot in a very short space of time. At 35 seconds long, Twiller Parkour is one of them. The drawings in this film consist of lines that jump around as if they have a life of their own, and the characters these scribbles create perform Johnny Knoxville style stunts, meaning that this cheeky little short has MTV written all over it. Little more than a joke about bums, this film’s simplicity is precisely what makes it so funny. Crude and outrageous, Twiller Parkour is toilet humour at its very best.

Striking a more serious tone, The Blood of The Bear tells the story of a young boy letting go of his dying father. The film takes place in a world resembling a scrap-book of William Morris wallpaper, where even the birds and snow are endowed with ornate floral patterns. Ed Scolding provides an accomplished score, with a desolate sounding fiddle capturing the fragility of the little boy’s situation. Ultimately, we are not sure whether parts of the film are supernatural or figments of the child’s imagination – but this does not really matter, because for every ounce of ambiguity in this short, there is a ton of sincerity. Touching and compassionate, The Blood of The Bear is a heartfelt fantasy that comments upon a very real and worldly set of experiences, relevant to anyone who has or will experience the loss of a loved one – which is to say, that it is quietly universal in its appeal. 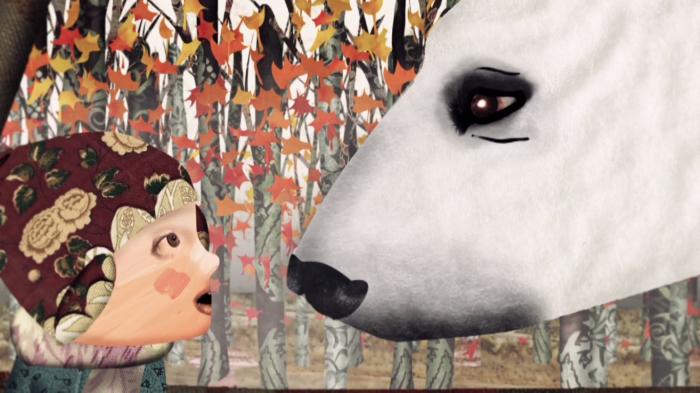 The Blood of The Bear

Lidice Shall Die is an emotive and compelling short about a little town in Czechoslovakia, which was completely destroyed by the Nazis in revenge for an assassination carried out by two Czech commandos. A mixture of animation and puppet work, Lidice Shall Die follows in the footsteps of Lotte Reiniger by using layer upon layer of silhouettes to tell its story through shape and shadow. Although essentially flat, the film makes use of space in ingenious ways – one particularly powerful image depicts the prongs of a swastika as they encircle and close in on the town of Lidice, for exmple. A haunting reminder of history’s darker secrets, Lidice Shall Die is a powerful, yet gentle force wielded in honour of those who deserve to be remembered.

I Miss You is a sweet film combining live action footage and animated characters to chart the journey of a love letter. What is impressive is that the animation is superimposed over shaky, handheld footage, and at one point, we even watch a cartoon character ride a real dog. Of course, the two mediums don’t marry up perfectly, but this is part of the film’s charm. Clearly this is an imaginary love story, but we choose to believe I Miss You because because it earns our respect by unashamedly wearing its love-sick heart on its sleeve – something captured by Bim’s rousing electropop which accompanies the film. All the more impressive is the fact that Katy Davis’ film was made in just 117 hours, as part of a challenge set by the 2013 Encounters Festival. Showing that quality animation can be made quickly, I Miss You is a lovely little short that will have you laughing and cooing all at the same time.

Bird’s Eye View is a colourful film in many ways. Adopting the strong palette and loose brush strokes of fauvism, Steven Twigg’s day-in-the-life of a pigeon, covers a variety of activities, including pecking cigarette stubs, defecating on statues, and repeatedly flying into the same window. We are led to view the pigeon mockingly, but a shock end to Bird’s Eye View leaves us feeling quite sorry for the little chap (who incidentally, is called ‘Willard’). Blunt in its humour, and even more straightforward in its tragedy, Bird’s Eye View is an interesting insight into the life of our feathered friends, and a funny little film that will open your eyes to a different perspective of the world. 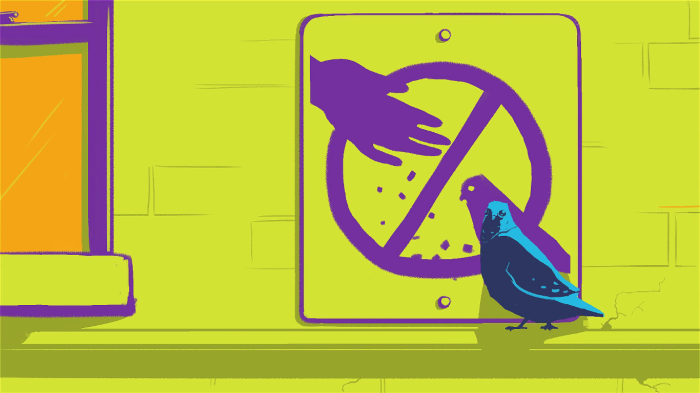 My last review begins by referring back to an old one: Reader’s may remember that in my coverage of day one of the festival, I created an award for ‘coolest film’ of the evening. If Victor Haegelin’s Wire and Flashing Lights had screened that night, it may have snatched this title for itself. A music video for Plastic and Flashing Lights by Professor Kliq (a punchy beat-driven track which sounds like the love child of Daft Punk’s Harder, Better, Faster, Stronger and Justice’s Phantom Pt I), Wire and Flashing Lights oozes style. We begin by watching a hooded youth tapping his jeans to an 8-bit rendition of the song’s main melody, before a cataclysmic explosion of drums and instrumentation transforms him into a walking wire model. As the new figure struts along a blacked out set, his head explodes in the shape of sound waves, whilst blocks appear and disappear from a mirrored floor in time with the music. Victor Haegelin manages to cram so much attitude into his creation’s movements, we might well describe the wire model as the personification of rhythm and funk. An absolute pleasure to look at as well as to listen to, Wire and Flashing Lights takes top spot of the night.

And with that final review, I bid you farewell. Leamington Underground Cinema’s 2013 festival is nearly over, but don’t fret! There’s still one more night of great films ahead of us, and I encourage you to join me for what promises to be a spectacular end to a fantastic week. You can buy your tickets here, and as always, be sure to come back to this space for continued coverage of the festival’s highlights.